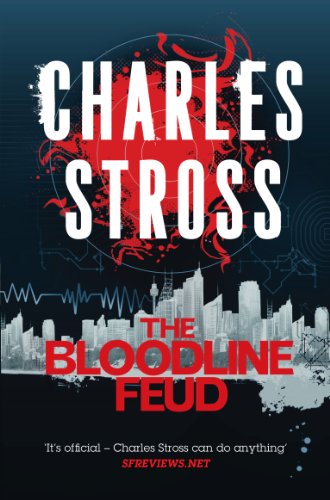 The Bloodline Feud by Charles Stross includes The Family Trade and The Hidden Family - The first two instalments of the Merchant Princes series combined in one volume.

Miriam Beckstein is a successful reporter for a hi-tech magazine. So when she discovers a huge money-laundering scam, she thinks she's hit the big time. But when she takes it to her editor, not only is she fired, but she starts to receive death threats. And that's just the beginning.

To distract her furious daughter, Miriam's adoptive mother unearths mementos from her real mother, murdered when she was an infant. But these reveal a secret that will ultimately throw entire governments into disarray. For what Miriam thinks is a simple locket has the power to fling her into an alternate timeline. In this less-developed world, knights on horseback wield automatic weapons, and world-skipping assassins lurk - all on the other side of our reality. Here, her true family runs a criminal empire - and they want her back. But Miriam has other plans.

Following The Bloodline Feud are two further omnibus volumes, The Traders' War and The Revolution Trade.

'A marvellous romp through this world and others, told by a master of the imaginative thrill-ride' Karl Schroeder, 'A festival of ideas in action, fast moving and often very funny' Locus, 'A rollicking, pacy read' Interzone